I am blessed to study at the University of Toronto, which has a world-class library system.   In fact, U of T’s libraries were recently ranked third among research libraries in North America, behind only Harvard and Yale.   The theological collections are strengthened by the fact that students have access to the libraries of the seven TST seminaries, as well as theological books held in Robarts Library, and special collections such as the Pontifical Institute of Medieval Studies library.   The U of T library system has just about everything you could need as a researcher.

However, when you get into a doctoral disssertation, you are often dealing with subjects that are so obscure that even U of T libraries can’t meet your needs.  That’s where interlibrary loans come in.

I think many students aren’t even aware of the amazing service that is available to them through interlibrary loans.    If my library does not have a particular book, but it can be found in another library (anywhere in the world), interlibrary loans will get it for me, free of charge. 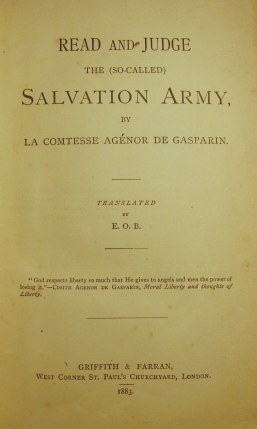 I’ve received dozens of rare books through interlibrary loans in the past two years.  Most have come from North America, but the 1921 book Les Charismes De Saint-Esprit by Bernard Maréchaux was sent to me from Radboud University Nijmegen in the Netherlands!

Earlier this fall I was able to get a copy of the 1917 Paulist Constitutions, sent from the Catholic University of America.   Twice I have accessed a two-volume unpublished official history of the Paulists by James McVann, which came from the U.S. Library of Congress (I had to read that one on-site in the Thomas Fisher Rare Book Library).   Without interlibrary loans, I would have only been able to access those materials in Washington, either at the Library of Congress or the Paulist Archives.

Today I picked up an 1883 book attacking The Salvation Army, Read and Judge the (So-Called) Salvation Army, written by a Swiss Countess and translated from the French.  This one came from Duke Divinity School.

Every time I receive something on interlibrary loan, I say to myself, “I can’t believe this service exists.”  And I wonder how long it has been since anyone else has picked up this obscure book that I’m holding in my hands.  I guess I am a total geek, since I find interlibary loans so exciting, but I definitely wouldn’t have been able to do the research I’ve done without the help of the interlibrary loans staff.

9 thoughts on “In praise of interlibrary loans”