To understand this post you’ve got to understand a bit about what it is like to work in a Thrift Store.

The job of sorting through people’s donations is interesting, but kind of like shopping at a garage sale – most of the stuff is junk, and you’ve got to be willing to sort through the garbage to find something good.  Actually, the odds of finding something good might be a bit lower than your average garage sale, because often people who have garage sales wait until their stuff is picked over, and then they donate it to The Salvation Army.

So once in a while you find something good.  But on very rare occasions, the staff and volunteers who are sorting through donations come across something so great, or so precious, that they decide to keep in on permanent display in the store, rather than selling it for a few bucks.

While I was working for The Salvation Army in the Quinte Region, we opened a new Thrift Store and Family Services facility in Campbellford.  It is a really cool buidling – formerly a baptist church, which was converted into a flower shop before it was leased to the Army (hence the painted flowers below the windows, which the landlord would not let us remove!).

During the grand opening, my brother happened to notice this doll sitting behind the counter, prominently marked “Not For Sale.”   I find it hilarious that someone thought this doll was so amazing that they just couldn’t bear to part with it.  You know what they say about one man’s junk…

If it was me, I would not want that doll staring at the back of my head while I worked the cash register.  I think it might give me nightmares.  It looks like something out of a horror movie.

People who have done research on The Salvation Army and the sacraments will probably be familiar with these quotes, but I find that a lot of people are surprised by some of the things that William Booth said about the Army’s non-observance of the sacraments.  So I’m just putting these three quotes out there, as a follow up to my last post.

First, from Booth’s official announcement that the SA would stop observing the sacraments (“The General’s New Year Address to Officers,” The War Cry, Janary 17, 1883):

Now if the sacraments are not conditions of salvation, and if the introduction of them would create division of opinion and heart burning, and if we are not professing to be a church, not aiming at being one, but simply a force for aggressive salvation purposes, is it not wise for us to postpone any settlement of the question, to leave it over for some future day, when we shall have more light?”

Moreover we do not prohibit our own people… from taking the sacraments. We say, ‘If this is a matter of your conscience, by all means break bread. The churches and chapels around you will welcome you for this.

Second, from a book Booth wrote in 1885 called Doctrines and Disciplines of The Salvation Army, Section 26, question 6 (I’m taking the quote from Roger Green, The Life and Ministry of William Booth (Nashville: Abingdon, 2005), 148):

Q: What is the teaching of Army on the subject of the Lord’s Supper? A: When such an ordinance is helpful to the faith of our Soldiers, we recommend its adoption.

…I should like to emphasize the fact that this with us is not a settled question.  We never disclaim against the Sacraments; we never even state our own position.  We are anxious not to destroy the confidence of Christian people in institutions which are helpful to them.

Obviously, I’m putting these up to flag the provisionality of Booth’s position (and the total lack of mention of a divine calling NOT to observe the sacraments), and also his desire to avoid any theological controversy relating to the sacraments.  He may have been naive to think that not having sacraments would steer him clear of controversy!, but also note that he viewed this position as conditional in part on the Army’s claim that it was not a church. Most Salvationists today claim that the Army IS a church.

I’m working on a post for the Rubicon on the section of the new Salvation Army Handbook of Doctrine which deals with the sacraments.

In the preface to the new Handbook, General Shaw Clifton writes:

This 2010 Handbook of Doctrine retains the wording of the 1998 edition except for minor clarifications and stylistic changes. The principal aim has been to maximise user-friendliness, for example by reallocating the Bible references and inserting them into the main narrative at the relevant places; renumbering the chapters to match the numbers of the Doctrines; merging the main Handbook with the 1999 Study Guide into a single volume, removing outdated material from the latter and condensing some parts of it; revising certain Appendices and introducing three new study aids by way of Appendices 5, 6 and 9. 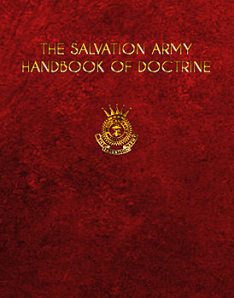 I guess the part on the sacraments falls under the category of “revising certain Appendices,” because there is clearly more going on here than “minor clarifications and stylistic changes.”

I’ve made a chart which puts the two texts side-by-side, so you can clearly see the changes that have been made to Salvation Story’s treatment of the sacraments (Salvation Story was the 1998 version of the Handbook).

I’ve got a pretty good idea how I’m going to structure the post – around two major points. But I’m interested in getting feedback from others.  Feel free to comment here, or email me (james [dot] pedlar [at] gmail [dot] com).

Here’s the chart in pdf: Comparison of Salvation Story and Handbook of Doctrine on Sacraments

If you want more context, you can find a pdf of Salvation Story here, and the Handbook of Doctrine can be downloaded here.

As I said in my introduction to this series, it is hard to find anyone today who actually tries to make a theological argument for the priority of the institutional over the charismatic in the Church.

Historically, the obvious example of prioritizing the institutional over the chairsmatic is modern Catholicism, before Vatican II.   The Roman Catholic Church was conceived as a perfect society, meaning that the Church was a complete social system, and its various elements were instituted by God, so that it would lack nothing in its historical existence until the return of Christ.  The priesthood, all the sacraments, the hierarchy, even monasticism and the religious life, were said to be derived directly from Jesus Christ himself.  These institutions were therefore invested with divine authority, such that, any “charismatic” who arose outside the established order would be seen as problematic. As Johann Adam Möhler summarized this view, “God created the hiearchy and in this way provided amply for everything that was required until the end of time.”

Of course the problem with this perspective was that, for one, it was not historically accurate.  It embraces what Avery Dulles describes as a “regressive method” of theology, whereby the latest teachings of the Church are adopted “as if they have been present from the beginning” (Models of the Church, 32), since any change would be seen as an “innovation,” and would undermine the view that all had been provided for in the Church’s institutions (including the magisterium).  Clearly, the Church’s institutions have developed over time, and many innovations have been made along the way.  Among these innovations, we must include some which I would call “charismatic movements”: monasticism of various kinds, the mendicant orders, apostolic societies, and so on.  These are among Catholicism’s most treasured institutions, but in the modern “perfect society” scheme of ecclesiology, it would have been difficult to explain their origins, apart from rooting them somehow in the divine institution of Jesus Christ.

These ideas are pretty far removed from the life of the Church today, even for Roman Catholics. However, the “institutional over charismatic” mindset is by no means absent.  Institutionalism is a pervasive social phenomenon, and all of our churches (even those which are highly charismatic) have to wrestle with the challenges it brings.  Therefore, the natural tendency in any church tradition is to be sceptical of leaders and movements who arise from oustide the established order.  We could say that, though it is not argued for theologically, “institutional over charismatic” is the default operating perspective of most churches.

Clericalism is perhaps the best example.  Even in evangelical churches, which profess a strong doctrine of the “priesthood of all believers,” there is a tendency to view the pastors as “professional Christians,” and to exclude lay people from fulfilling many roles which they ought to be able to fulfill.  Those who have the gifts (charisms), should be freed to exercise them, but they are sometimes excluded simply by virtue of the fact that they are not clergy.

I grew up in a denomination (The Salvation Army) where the clergy are largely responsible for the business of the church.   It strikes me as rather odd that we should expect pastors to be business-savvy, when there are likely members of their congregation who are business men and women themselves.

I’ve noticed that a lot of other evangelical traditions tend to have a “pastoral prayer” at every service.   This is where the pastor stands up and leads the congregation in a long prayer prayer.   I suppose most people see this as harmless, but I think it promotes a clericalist mindset.  Why would we want the pastor to be the only who publicly prays during worship?  It sends the message, again, that pastors are the “professional Christians.” It is interesting that in the older traditions (Catholic, Anglican, Lutheran, etc.), which most evangelicals assume are more “clericalized,” the prayers are not led by the pastor, but by lay intercessors. In the SA, the officer often leads this prayer, but sometimes it is a layperson.

The problem is that we can’t go too far in the other direction.  We need institutions, including ordained ministry (in my opinion).  We need stable structures that endure over time, and provide a means for passing on the faith from one generation to the next in a way that retains the historic core of gospel teaching.  We cannot escape this need.   We must embrace the institutions of the Church, without absolutizing them, and thereby excluding any new wisdom that the Spirit might bring from unexpected places.  That means, in part, that the institutional authorities of the Church must be open to discerning and coordinating the charisms that arise among the people.

I found this  sign in Perth on the weekend.   “McLean Insurance: GREAT RATES, Award-Winning Service, FREE Pizza.”  The three things everyone is looking for in an insurance company!

Would you make a decision on something as important as an insurance policy on the basis of an offer of free pizza?

I guess it would depend on how good the pizza was.   If it was from the Goodwood Oven, just up the street, I might be tempted!