This isn’t a full-fledged positive account of the Wesleyan-Arminian position, but rather a philosophical critique of Calvinism.

The take-away point is Walls’s claim that the heart of the difference between Calvinists and Wesleyan-Arminians has to do with the character of God, not the issues of sovereignty and biblical authority as people sometimes assume.   I’ve made a similar point in a previous post here.

Thanks to Kevin Jackson for spreading the word about these videos.

These are well worth a listen.  Both parts together total about 35 minutes.

I was saddened to hear that Professor Margaret O’Gara passed away yesterday after a two year battle with cancer.  Margaret was a long-serving professor of theology at St. Michael’s College, with a distinguished record of research, publication, teaching, and service to the church. She will be remembered by many, including myself, as a great theological mentor.

When I began my doctoral studies in September of 2007, I found out that Margaret was on my supervisory committee.  My committee met without her, however, and I didn’t actually come into contact with her until I enrolled in her class “Breakthroughs and Barriers in Ecumenical Dialogue” in January of 2008.   I was somewhat unsure if I should take the class.  The course description looked good, and I was already convinced of the importance of doing theology ecumenically.  But I suppose I carried with me some of that typical evangelical reticence towards ecumenism.  One evangelical colleague even advised me that I should not take the course.  However, I was very glad that I did, because the course material, along with Margaret’s own teaching, played a significant role in shaping the direction of my dissertation.  In fact, I appreciated the course so much that I signed up for another in September of that year, “Ecumenical Dialogue on Authority.”

I was raised in a tradition that has a very strong sense of denominational identity.  Even more than that, The Salvation Army claims to have a distinctive mission within the broader Christian church.  I believe to this day that The Salvation Army does have a special vocation within the church, but I have pushed back against some of the ways that this has been explained and conceived in Salvationist thinking.  I think that Salvationist identity sometimes morphs itself into a prideful triumphalism, wherein The Salvation Army is seen as something “other than” or “more than” the church.  For this reason, I had, before studying ecumenical dialogue, begun to see all claims to a unique denominational identity and mission as problematic and divisive.

Margaret’s approach to ecumenical dialogue was to conceive of it as a “gift exchange.”  This idea was not unique to her – she drew it out of magisterial sources in her own Catholic tradition –  but she was able to express it in a way that brought helpful conceptual clarity to the process of ecumenical dialogue.  She literally wrote the book on the subject (see The Ecumenical Gift Exchange).  Her expertise on ecumenical dialogue was developed out of decades of participation in national and international bilateral dialogues, which included work with Lutherans, Anglicans, Mennonites, the Disciples of Christ, and evangelicals.

When we began the class, she introduced the idea of the gift exchange, and asked us to introduce ourselves by sharing a) one gift which our church tradition could share with others and b) one gift we would like to receive from another tradition.  I don’t remember what I said, but I do remember that both courses I took from Margaret were living examples of this exchange of gifts, as the students, drawn from a variety of church traditions, not only shared from the gifts of our own traditions, but studied the various gift exchanges that have taken place through the ecumenical dialogues of the past fifty years.

The idea of “gifts” found within different traditions is, ultimately, what led me to my dissertation topic of ecclesial charisms, though my argument proceeds along quite different grounds from Margaret’s conceptualization of the process of ecumenical dialogue.  I am looking at a more specific question about a particular kind of gifts (charisms) and how these might expressed corporately in ecclesial bodies of various kinds.  The specific idea of using the language of “charisms” in this regard comes not from the ecumenical dialogues we studied in those classes (though it is occasionally treated there), but rather from the Catholic theology of religious life (religious orders and societies in the church), which I am applying more generally and ecumenically to “movements” in the church.   Indeed, part of my argument is that the language of “charisms” should not be applied across the board to all of the various “gifts” found in our traditions (and shared in ecumenical relationships), but more specifically to personal gifts of grace which carry a vocational obligation.

Nevertheless, in spite of the differences, my dissertation on ecclesial charisms may not have existed if not for Margaret’s work on the gift exchange of ecumenical dialogue.  Not only that, but Margaret also provided a great deal of personal guidance and encouragement for the project.  She helped me work through the ideas as I was conceiving the topic, and also played a pivotal role in shaping my comprehensive exams, which formed the background for my work.  For example, it was Margaret who suggested that my second comprehensive exam should be on reform movements before the reformation – an idea I never would have thought of, but which gave me a wonderful historical perspective on various movements of reform and renewal, and how they  related to the established church.

I suppose, if it wasn’t for Margaret, I also might not have applied to work with the Commission on Faith and Witness at the Canadian Council of Churches.  I worked there throughout 2010 and 2011, and was able to experience the joys and frustrations of ecumenical dialogue for myself.  This only confirmed much of what I had already learned from Margaret in the classroom.  One of the highlights of my two years there was a three-person panel I helped organize for the November 2010 Governing Board meetings, entitled “Ecumenical Dialogue as a Gift Exchange.”  Margaret was one of the presenters.

There is much more that could be said, and I am sure that others, who knew Margaret much better than I did, will offer fitting tributes to her life and work.  I am just one of the many people she influenced.  I am truly thankful that, through God’s providence, I was able to benefit from Margaret’s wonderful gifts as a theologian.

Some great quotes I came across while reading Wesley’s Journal this week – a mix of the profound, the witty, and the humourous. 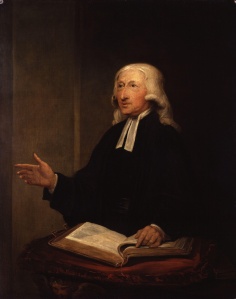 On an elegant meeting house:

“I was shown Dr. Taylor’s new meeting house, perhaps the most elegant one in Europe.  It is eight-square, built of the finest brick, with sixteen sash-windows below, as many above, and eight skylights in the dome, which, indeed, are purely ornamental.  The inside is finished in the highest taste and is as clean as any nobleman’s saloon.  The communion table is fine mahogany; the very latches of the pew doors are polished brass.  How can it be thought that the old, coarse gospel should find admission here?’ “Wednesday, November 23, 1757.

“The captain with whom we were to sail was in great haste to have our things on board; but I would send them while the wind was against us.  On Wednesday he sent message after message, so in the evening we went down to the ship, near Passage; but there was nothing ready, or near ready for sailing.  Hence I learned two or three rules very needful for those who sail between England and Ireland: (1) never pay till you set sail; (2) go not on board till the captain goes on board; (3) send not your baggage on board till you go yourself.”  Tuesday, August 1, 1758.

His love for a soft cushion:

“On Monday and Tuesday evening I preached abroad, near the Keelmen’s Hospital, to twice the people we should have had at the house.  What marvel the devil does not love field preaching?  Neither do I.  I love a commodious room, a soft cushion, a handsome pulpit.  But where is my zeal, if I do not trample all these under foot, in order to save one more soul?”  Saturday, June 23, 1759.

Preaching to the rich:

“It is well a few of the rich and noble are called.  Oh, that God would increase their number!  But I should rejoice (were it the will of God), if it were done by the ministry of others.  If I might choose, I should still (as I have done hitherto) preach the gospel to the poor.” Saturday November 13, 1759.

Preaching over a hog sty:

“We had a pretty large congregation; but the stench from the swine under the room was scarcely supportable. Was ever a preaching place over a hog sty before?  Surely they love the gospel who come to hear it in such a place.”  Friday, November 23, 1759.

“One came to me, as she said, with a message from the Lord, to tell me, I was laying up treasures on earth, taking my ease, and minding only my eating and drinking.  I told her, God knew me better, and if He had sent her, He would have sent her with a more proper message.”  Wednesday, January 16, 1760.

A fool of a saint:

“I read the celebrated Life of St. Katherine, of Genoa.  My Lesley calls one “a devil of a saint”; I am sure this was a fool of a saint; that is, if it was not the folly of her historian, who has aggrandized her into a mere idiot.  Indeed, we seldom find a saint of God’s making, sainted by the bishop of Rome.”  December 3, 1761.