This year’s Wesley Ministry Conference at Tyndale was a great success.   Over 180 people from various Wesleyan denominations gathered to hear Leonard Sweet speak, and to take in a workshop on discipleship from Matt Eckert and Luc and Rosetta Del Monte.  It was a very engaging and thought-provoking day.

When Howard Snyder heard that Len Sweet was coming to the conference, he commented that Sweet could give you enough ideas in five minutes to keep you thinking for five days.  It’s been a week since the conference, and I think Howard was right.

While I wouldn’t attempt to give a total summary of all Len Sweet said last Monday, here are three of the big themes from his talks that have stuck with me:

1. Leadership as a function vs leadership as an identity.  He began in the morning by addressing this topic, and lamented that in the past few years, the church has turned “leadership” into an identity, when it should really only be conceived as a function which people exercise at various times.  Our identity, rather, is as followers, not leaders; we are disciples first and foremost, but at times some of us have to provide a leadership function.  He asked the pointed question, “How many followership conferences have you been to in the past five years?”  Churches have spent a lot of time and energy trying to take on ideas and practices from the business world, often without reflecting theologically on how these ideas square with Christian discipleship.  This is something I’ve been concerned about for some time (I wrote about it three years ago), so I was glad to hear him address it on Monday (if you are interested in this issue check out his book I Am A Follower). 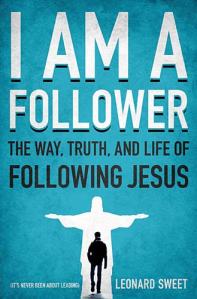 2. Mission stories vs mission statements.  Connected with the above point, Sweet addressed the issue of “mission statements,” one of the business practices that the church has taken up in recent decades.  He suggested that the church already has a mission statement – the great commission – but that we make up our own mission statements because we don’t like the one we’ve been given!   More importantly, Sweet was reflecting on how contemporary culture doesn’t connect well with truths communicated via “statements.”  This is familiar territory for students of post-modern culture – the idea that in contemporary Western culture, truth is most readily accepted as embodied in narrative and metaphor (or “narraphor” as Sweet stated it), rather than in propositional statements.  Sweet took this larger cultural trend and applied it to the church’s mission: it ought not to be articulated in a statement; rather, we need the story of the gospel to shape our mission in a compelling way.  He made a similar point in relation to preaching, saying that “points” don’t communicate to a “Google culture,” though they connected well in the “Gutenberg culture.”

3. Dirty hands and a clean heart.  Sweet then exemplified the ideas he’d been sharing by offering a “narraphor of holiness.”  Beginning with the incarnation as the revelation of God’s holiness, he focused in particular on foot-washing as an example of God “getting his hands dirty” in the world. Against our tendencies to view holiness as a kind of purity that remains separate from the world, Sweet stressed that true Christian holiness is normed by the story of God’s self-giving in the incarnation.  Thus, dirty hands are the evidence of a clean heart.

I’m really glad we had a chance to host Len Sweet here at Tyndale – he definitely gave us lots to think about.  You can read another report on the day on the Tyndale website.