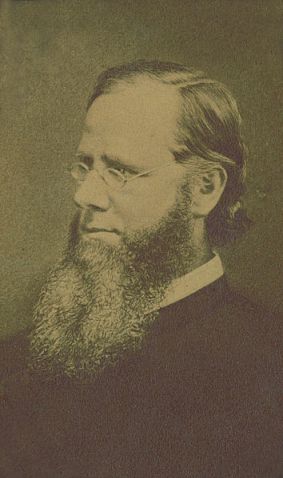 One of the reasons I chose to study the Paulist Fathers alongside The Salvation Army in my dissertation is because the Paulist Founder, Isaac Hecker, had connections to the Methodist tradition.  Hecker’s Methodist grounding was tenuous, and nothing like William Booth’s ardent devotion to all things Wesleyan.  Booth is famously quoted as describing his early commitment to Methodism in the following terms: “To me there was one God, and John Wesley was his prophet.” (Booth-Tucker, Life of Catherine Booth, I: 52). Hecker had a fairly negative view of all the Protestant denominations, and spoke very negatively of his religious upbringing.  However, some have suggested that Methodism had more of an influence on Hecker than he himself might have wanted to acknowledge.

Issac Hecker was born in New York, the son of German immigrants, in 1819.  His parents married in the Dutch Reformed Church, but his mother Caroline soon joined the Methodist Church, and was a faithful member of Forsythe Street Church for the remainder of her life, even though most of her family members had no association with Methodism.  Of the four Hecker children, only one, Elizabeth, joined her mother’s church.  Caroline Hecker seems to have maintained a remarkably tolerant attitude in matters of religion, and was quite content to let her sons worship in other traditions.

Although not a great deal is known of Isaac Hecker’s involvement with the Methodists, it seems clear that he did have at least some exposure to Methodism as a child, and he had his first job working for a Methodist publishing house.  Vincent Holden, one of his biographers, claims Hecker “became acquainted with fundamental Methodist doctrine and with the Methodist form of worship.”  (The Yankee Paul, p. 7)

Indeed, it has been argued that some of the Methodist ethos remained with Hecker in subtle ways throughout his life.  The point is made by John Farina, both in his Introduction to Isaac T. Hecker, The Diary: Romantic Religion in Ante-Bellum America, as well as in chapter 2 of his book, An American Experience of God.

Farina highlights several features of Methodism that would have been formative to Hecker’s early religious instruction, and which remained prominent in his own thinking and experience throughout his life:

Anyone picking up Hecker’s own writings, or reading the story of his life, can see how these emphases remained an important part of his spirituality after he became a Catholic.

Hecker was surely exaggerating when he later claimed, “no positive religious instructions were imparted to me in my youth.” (The Paulist Vocation, 49).  By the time he had reached adolescence, however, he seems to have decided that Methodism was not sufficient for the spiritual desires he felt had been placed in his own heart.  He started off on a circuitous spiritual quest that led him through political action and Transcendentalism, before he came back to the Christian Church, and eventually entered the Roman Catholic church.

Hecker was an enthusiastic Catholic, and had some strong criticisms for the Protestant traditions. In a document submitted to his spiritual directors in Rome as part of his petition for permission to found the Paulists (1858), Hecker recalled that he considered the various protestant bodies but “none answered the demands of my reason or proved satisfactory to my conscience.” In The Paulist Vocation, 52.

More specifically, regarding Methodism, Hecker commented in 1887: “…in our time it had no stated intellectual basis.  It was founded totally on emotional “conversion,” with the notorious exclusion of the intellect.” See “Dr. Brownson and Catholicity,” The Catholic World 46 (November 1887): 231.

Farina suggests that his critique of the “intellectual basis” of Methodism (and other protestant traditions) was aimed not at the internal coherence of protestant doctrine, but more fundamental questions about the nature of religious faith, and the correspondence between inner religious experience and the external world (Farina, An American Experience of God, 29).

In spite of his criticisms of the Methodism he had known as a child, I think Farina is correct in suggesting that Methodist influence can be seen in Hecker’s own thought.  I hope that at some point in my future writing I will have a chance to take up this question and provide a thorough scholarly demonstration the Methodist influence on Hecker.