These two new books will be of interest to those who study Methodist theology and history. 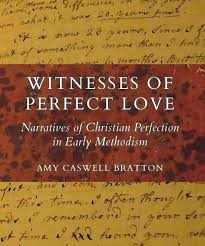 First, Amy Caswell Bratton’s Witnesses of Perfect Love: Narratives of Christian Perfection in Early Methodism (Clements Academic, 2014), tackles the doctrine of Christian perfection from a different angle: the personal narratives of Methodists who claimed the experience of perfection.  While Methodist conversion narratives are well-known, this book looks at how early Methodist narrated their continuing struggle towards Christian perfection.  By examining four particular cases in detail, Bratton is able to delve deeply into the way that early Methodists interpreted and understood their own Christian life in light of distinctive Wesleyan teaching on sanctification.

What must also be remembered is that such narratives were often published and circulated in Methodist circles.  Therefore, these narratives represent not only personal interpretations of the doctrine, but also one of the ways that Christian perfection was interpreted to the Methodist community.  In other words, theological studies of Christian perfection, which traditionally focus mostly on more traditional theological literature, should also consider these narratives as part of the corpus of Wesleyan holiness teaching.

You can find out more about the author and the book on her site.  Bratton’s book is the most recent volume in Tyndale’s Studies in Wesleyan History and Theology series.  Previous volumes were contributed by Howard Snyder and Victor Shepherd. 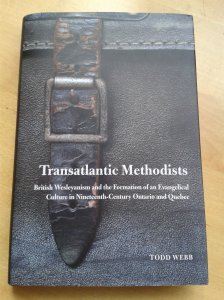 My second recommendation is Todd Webb’s Transatlantic Methodists: British Wesleyanism and the Formation of an Evangelical Culture in Nineteenth-Century Ontario and Quebec (McGill-Queen’s UP, 2013).  Webb, who teaches at Laurentian University, offers an account of 19th century Canadian Methodism that stresses its connections to British Methodism.

Webb’s excellent account not only narrates the history of the developments, which can be quite confusing, given the multiple mergers and schisms which took place on both sides of the Atlantic, but he but also notes how particular issues, such as finances (chapter4) and revivalism (chapter 5) can help to illuminate the complex relationship that existed between the various Methodist bodies.

As I’ve already said, both books are highly recommended.