I’m on vacation this week, so I thought I’d pull this post out of the archives from April 2010:

I stumbled upon a biography of Henry Cardinal Manning at the Regis College Library yesterday, published in 1892, the year of his death.  The book happened to be on their booksale shelf, for $2.   Many used book collectors are wary of library discards, because of the library marks, stamps, and stickers, as well as general wear and tear.  Personally I find these things endearing.  It adds the character of an old book when you can see the names of previous owners inscribed on the inside cover.

This bears the stamp of two previous libraries.  Obviously it was most recently part of the Regis College library’s collection, but prior to that, it found a home in the library of “J. & E. Stoneham Ltd., 51 Old Broad Street, London, E.C.2.”   Doesn’t that make you wonder how this book got from London to Regis College?

Manning is a towering figure in 19th century England, a high profile Anglo-catholic who converted to Catholicism and became Archbishop of Westminster in 1865.   Those who have read a bit of Salvation Army history will know that Manning was sympathetic to the work of the Army, but also willing to challenge the Booth on some of his presuppositions.  You can read an interesting comment from Manning on his appreciation for Army and his concerns with its teaching and practice in The Contemporary Review 41 (1882): 335-342.   Roger Green quotes from this passage in hisrecent biography of William Booth, specifically noting Manning’s astute on the Army’s claim that it was “not a sect,” in spite of the fact that it had no ties to the larger Church.

“The head of the Salvation Army is resolved that it shall never become a sect. In this he is wise. A sect is soon stereotyped. He seems to wish that it may not be a sect, but a spirit, which, like the four winds, may blow upon all the valley of dry bones—men, women, children, sects, communions, and, as he perhaps would say, Churches, quickening and raising them all to a higher life. So long as the Salvation Army teaches the three creeds in their true sense, and does not assail the Catholic faith or Church, it is so far doing a constructive, if it be only a fragmentary work… Nevertheless, we have a conviction that the Salvation Army will either become a sect, or it will melt away. This world is not the abode of disembodied spirits.” (341-342)

Manning was picking up on an ecclesiological ambiguity in the Army: they claimed that they were not a denomination or “sect,” yet they were a free standing Christian body, whose members were not members of other “churches.”  There is more work to be done on this question, and Salvationists need to reflect on its implications, and the degree to which Manning’s prediction came to fruition.

At the end of the biography of Manning I picked up yesterday, author Arthur Wollaston Hutton is speculating on what may come after Manning has passed the reigns of English Catholicism on to his successor.  Remarking on Manning’s emphasis on ministry to the poor, he writes: 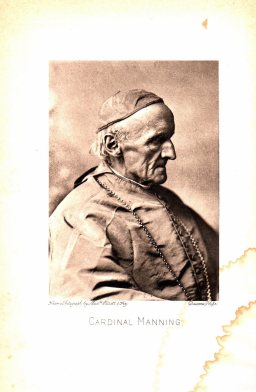 “And indeed, if his spirit should survive in his successsor, there is one field – a very widely extended one – in which the Catholic Church in this country might hereafter reap a rich harvest.  Manning’s sympathy with the philanthropic work of “General” Booth was never disguised, and he was too much of an organizer himself not to look with admiration on the order and discipline of the “Salvation Army.”  The Army has a growing affinity with Catholicism, and its members, accustomed to an autocratic rule, might very well find in some future Archbishop of Westminster the successor who will surely one day be needed, if the organization is to be held together at all.  Of course these soldiers and salvation lasses are far enough from being Catholics at present; but they have accepted fully the fundamental principle of Catholicism – obedience; and in other was they are really nearer the Church than Dean Stanley’s “three men in green, whom your Lordship will find it difficult to put down.”  The ritualists, in spite of Catholic externals, are mostly liberals wearing blinkers, in accordance with the fashion introduced by Newman, and still much affected by polite society.  But the Salvation Army men are not theological liberals, and wear no blinkers, for they do not them any more than Manning did, believing with him that the straight road before them is the way revealed, and so caring to look neither to the right hand nor to the left.  A simple, certain faith is theirs, – belief in God, in sin, a Redeemer, the Bible, judgment, salvation, heaven and hell; and this simple faith is a far more serviceable basis on which to build a permanent structure of Catholicism, than the clever literary quibbles by which men better educated are able to persuade themselves that they hold to the old faith.  There is thus a promising field for an expansion of the Catholic Church – unless Catholics themselves shirk the opportunity – which should be further facilitated by the marked revival of credulity in recent times, and the growing popularity of ritual and outward show.”  – A. W. Hutton, Cardinal Manning. London: Methuen & Co., 1892, pp. 256-258.

Given the ecclesiological gulf that existed between 19th century Catholicism and the early Salvation Army, it is amazing to see a Catholic author publicly speculating about the possibility of a “Catholic Salvation Army.”  It is also interesting to notice those things which he thinks constitute an affinity between the Army and Catholicism: autocratic structures, conservative theology, and a lack of concern for “polite society.”   It seems counter-intuitive, but Hutton feels that these are “a more serviceable basis on which to build a permanent structure of Catholicism” than the sophisticated theological output of Ango-catholics.

This says a lot about the dominant characteristics of both the Army and Catholicism at the time!  We might wonder why Hutton doesn’t raise the ecumenical issues that loom large in the Army’s ecumenical relationships today: sacraments and ministry (in terms of the validity of “ordination”).  The reason is that people of the time (including Salvationists) didn’t look upon the Army as a “church.”  So a Catholic wouldn’t have related to the Army in the same way they would have related to the Church of England, or Lutherans, or Baptists.  They might think of the Army more along the lines of a irregular and unauthorized missionary order or congregation, one which was doing some good work, but was in danger of drifting from the apostolic faith over time, if not grounded in catholic soil.